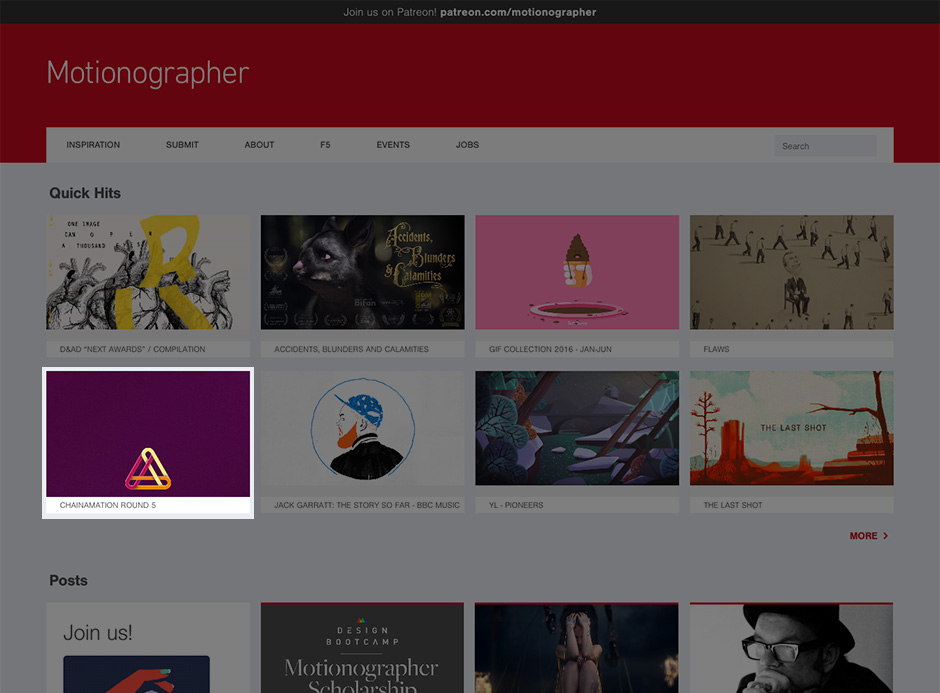 Earlier this year I participated in round 5 of a collaborative project called Chainamation. Last week, the final video was published with the animations from every contributor from round 5 plus an awesome soundtrack. It was then featured recently in the Quickies/Inspiration section of Motionographer! Motionographer is one of the top sites (if not the top) to find inspirational and informative work related to motion design, so it’s truly exciting to have participated in something that appeared on this site!

Motionographer now includes direct links to specific Quickies, however the full video is also below. My chunk is from 0:07-0:09, and I’ve also written about this project further in my portfolio.

Here’s a brief description of what Chainamation is:

While attending Blendfest, consuming several wines after many coffees, Shawn Hight, Ira Hardy and Kyle Martinez got to talking… how can we be more collaborative?

Each contributor was given 72 hours to animate 1-2 seconds adding to what the previous animator had done.

Participating in Chainamation (plus comparisons with Motion Corpse)

It was a fun challenge participating in another collaborative project, this time for Chainamation. Prior to this, I participated in 2 rounds of another collaborative project for Motion Designers, called Motion Corpse (rounds 8 and 5). If comparing the two, Chainamation has a shorter time-limit, with animation needing to be completed within 72 hours–versus the 1 week to design and 2 weeks to animate with Motion Corpse (however you’re animating 5 seconds instead of 1-2).

Also, for Chainamation, the soundtrack is created once all of the contributor animations have been compiled. For Motion Corpse, the final soundtrack was provided early on to help with considerations for the design and animation timing.

Both processes provided an interesting way to work, and I would highly recommend participating in either project, especially if you’re looking for a way to collaborate with people online, as well as push yourself to design and animate something new based on another artist’s assets.

If you’re interested in participating in Chainamation, just fill out the form they provide here. Also take a look at Motion Corpse.